About ATHC
“Amber and the Hidden City” is a short-form podcast “audionovela” for kids, ages 8-12, based on the popular YA novel of the same name by Milton J. Davis. The audio series follows the adventures of the title character as she discovers that she’s the heir to a magical hidden kingdom and must save the world from certain destruction.

Part “Nancy Drew”, part “Black Panther”, with a dash of “Harry Potter” and the “Overlander” series, “Amber and the Hidden City” features a strong, smart, brave African-American heroine who problem solves, thinks creatively, and overcomes all obstacles. At the same time, she works through issues common to all adolescents – self-discovery, self determination, feeling vulnerable, and gaining confidence.

​Told through a series of fully produced 5-minute “bite-size” episodes with cliffhanger endings, “Amber and the Hidden City” is a fast-paced adventure mystery set in multiple cities around the world. It will leave tweens guessing - and coming back every day - for each new episode!

The project is a podcast collaboration between Paula Gammon Wilson (Pepsqually VO) and award-winning author, Milton J. Davis (MVmedia). Adapted for podcast by Paula Gammon Wilson, with casting, voice over performance direction, and sound design provided by Pepsqually VO. The series is currently in development and is seeking additional backing.
Help us tell Amber's story with your donation today! Click here.
Your Donation
"Amber and the Hidden City" is the first in a trilogy of novels about Amber's journey. Across 30 episodes, the first season of the podcast will follow her journey through Book 1. 100% of your donation will go towards paying our amazing cast and our production team. Each episode requires 24-30 person-hours between production and post-production. The more donations, the more we can do!

Once the series is produced, all episodes will be made available for purchase or streaming on various platforms (Spotify, iTunes, etc.). Donors will be recognized in our credit audio, and will receive early access to future episodes and behind-the-scenes extras.

The second book in the series, "Amber and the Enchanted Sword", is nearing completion. It will be be possible to continue the series beyond the first 30-episode season within six months of the first season.

Additionally, the property is highly adaptable beyond the podcast sphere, and could easily make the move to other forms of media - graphic novel, animation, television, or film. 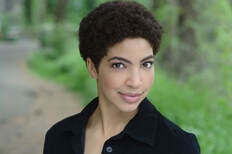 Paula Gammon Wilson – Script/Adaptation, Casting Director, Voice Over Performance Director
Paula Gammon Wilson is the Owner/Director of Pepsqually VO and Sound Design, Inc. in New York City. She is known for her excellence with managing multinational production teams due to her nearly 20 years experience as a director, production manager, dancer, writer, and voice over artist in North America, Asia, Europe, and South America. She has been described as a "polite perfectionist", who is "patient" and "a joy to work with". With Pepsqually VO, she has provided flap-adaptation, casting, performance direction, project/production management, and recording/engineering for a wide range of animated series, ad campaigns, pilots, and educational series. Her clients are based in both the US and abroad. Since 2017, she has been the “go-to” casting director and performance director for several dramatic podcast projects for clients such as Scholastic, Inc. and Pinna/Panoply. She served as Voice Over Performance Director for the children’s podcast series, “Season Isle” (Parents’ Choice Award – Silver); “Grimm, Grimmer, Grimmest” (Parents’ Choice Award – Gold); “Hill-Larry-Us” (Parents’ Choice Award – Silver); “Opal Watson: Private Eye” (Parents’ Choice Award - Gold); and “Children of Sperea”. She also served as the Casting Director for “Season Isle”; “Grimm, Grimmer, Grimmest”; “Hill-Larry- Us”; “Opal Watson: Private Eye”; “Children of Sperea”; “Remy’s Place (Parents’ Choice - Recommended); “Kyle’s Wild World" (Parents’ Choice – Recommended); “The Furrytones” (Parents’ Choice – Fun Stuff Awardee); and “The Totally Unauthorized Minecraft Fan Show”.

Milton J. Davis – Author of “Amber and the Hidden City” - The Novel.
Milton J. Davis is the award-winning author of 30 novels and anthologies of Afro-Futurism and Steamfunk. Four of his novels are currently being adapted into comic books, graphic novels, and animated series by several different production teams. Based in Georgia, he runs several literary/pop culture symposiums and events, including his very popular bi-yearly event, “Blacktasticon”- a convention dedicated to film, television, books, comic books, graphic novels, and art by artists of the African Diaspora. “Amber and the Hidden City”, the first in a trilogy of fantasy YA novels, was recently added to middle grade reading lists in all Atlanta-area schools. To check out the source material and get your own copy of "Amber and the Hidden City", click here!
Please Note: The book skews older than the podcast series and is appropriate for teen audiences.
Questar Welsh – Recording Engineer/Sound Designer
Questar Welsh is the owner of Real Recording, Inc. in New York City. He is an award-winning, veteran recording engineer and producer, with over 30 years experience as an engineer/producer for the radio, film, television, and music industries. Known for his unflappable professionalism, speed, and unsurpassed quality control, he has become the favorite engineer/producer for such companies as Nickelodeon, Luckie and Company, New York State Medicaid Choice, Macmillan Publishing, Exhale Spa, St. Martins Press, Cason Nightingale Creative, Henry Holt and Company, Woofbert, Atavist Books, Correction Officers Benevolent Association, Sample SRL Italy, Brooks Audio, Stony Brook Medical Center, Nice Advertising, Select Records, 4K Media, Skyline Arts, See Spot Cut, Vanarex World Wide, Tag Europe Ltd., Reebok, as well as an impressive roster both in the US and abroad. He has served as Pepsqually VO’s primary recording/engineering partner since 2014.
Cast: Savannah King, Gloria Manning, Noa Fe Williams, Billy Bob Thompson, Laurie Hymes
Cast credits include: Young Tina in “Tina – The Tina Turner Musical” on Broadway; Becca in “Becca’s Bunch” (Nickelodeon); Hiromi Izumi in the dub of “Okku’s Inn”; Various roles in “Transformers”; Various roles in “Cannon Busters”; Various roles in “Pokemon”; Various roles in “Yu-Gi-Oh”.
*As the majority of our cast ranges in age from 11-14 years old, we are not posting their pictures here.
Want More Information?
For our complete pitch package, including production plans, budgets, and scripts, please contact us!